Did anyone watch it last night (Saturday)?

Happy Harry was the first ‘celeb’ into the hot seat. He answered the first 3 questions correctly, and needed to get the fourth correct, so he could guarantee £1000 that his chosen charity would definitely get!

Here was the fourth question….. 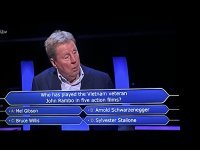 For those unable to read it, the question was, “Who has played the Vietnam veteran John Rambo in five action films?”

Poor old Droopy didn’t know, on account that the last film he saw at the flicks, was Dr. Zhivago, with ‘Sandra’ in 1965! So he has a guess and says ‘Bruce Willis,’ and I instantly fall off the sofa, pissing myself laughing, cos I know if he says ‘Final Answer’ to his choice, the cunt is going home and his charity will be getting the sum total of Jack Shit!

Still not 100%, Droopy decides to use one of his four lifelines, and goes 50-50 - and Willis and Stallone’s names are left - so the cunt thinks he’s deffo on a winner now, so says ‘Bruce Willis - final answer.’

His boat was an absolute picture when Clarkson said, “It’s the wrong answer.”

I mean, he had 3 more lifelines he could have used— two phone a friends and ask Clarkson - but he thought he’d be Billy Big Bollocks and show everyone he was the new Barry Norman - and failed spectacularly!

He did say that he would donate £5000 of his own money to his charity choice (basically for fucking them over), but you knew it was just to save face, as well as adding to his cheerful cheeky crappy cockney persona of his!

Now we know where his son Jamie gets his razor sharp intellect from!

”Triffic,” as his old man would say!

Now that was funny

Twitchy you proper fucked that up.
Brilliantly written mate

The Redknapps are the cream of the footballing world
" Rich ,thick & full of clots"
L

Phlion54 said:
The Redknapps are the cream of the footballing world
" Rich ,thick & full of clots"
Click to expand...

He should have got his dog to go on there instead.
L

BigPaul said:
He should have got his dog to go on there instead.
Click to expand...

Why? Do you think Sandra is anymore intelligent than her husband?

Life with the Lions said:
Why? Do you think Sandra is anymore intelligent than her husband?

I'm not sure, but choppers the bulldog certainly is. (or whatever he's called)
A

He’s never recovered from the ball hitting him in his smug boat at the Den.
L

albertrn said:
He’s never recovered from the ball hitting him in his smug boat at the Den.
Click to expand...

That was probably the start of his memory loss!
P

That should have been the question:
Where did a pie hit you in the face
West ham
Crystal palace
Wembley when you managed England or
The most famous small club in the world?

albertrn said:
He’s never recovered from the ball hitting him in his smug boat at the Den.
Click to expand...