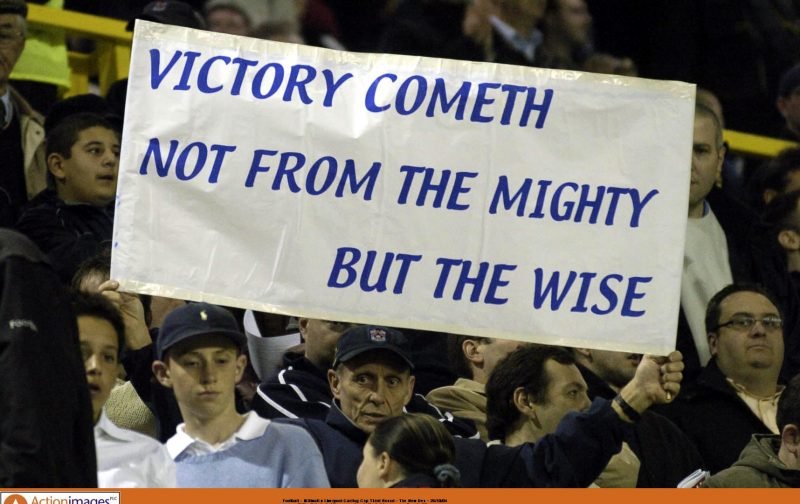 That’s it. We’ve done it. The side that could not buy an away goal, let alone win, chalked up their SIXTH consecutive Football League win, a record for the club.

Classy goals from Lee Gregory and Ben Marshall secured a victory which eclipsed the five straight wins on the road achieved by Millwall’s legendary, all conquering 1927-28 Division Three South Champions. And equalled the record of six set up by Kenney Jackett’s side in 2009*.

It was another superbly disciplined display who frustrated Barnsley for 90 minutes and forced them into countless mistakes.

A deserved victory – another which might well have ended up as yet another 4-1 result between the two clubs.

And all the remarkable as it was played in extraordinary conditions, the pitch marked in blue in case the heavy flurries of snow eventually settled. But it was the high winds which caused the greatest problems, especially for our back four who at times had problems dealing with a ball which wobbled violently in the gale.

Archer 7. Usual Jekyll and Hyde performance, unaccountably dropping the ball one moment, then pulling off superb saves the next. Elected to stay on his line for crosses, which was probably a good idea in the conditions.

Romeo 7.5. Has become a completely dependable member of the defence again putting in an accomplished display at the back and bombing forward at every opportunity, causing Barnsley all kinds of problems.

Meredith 8. Quite superb this afternoon, dealing with barnsley most dangerous player with ease. Great tackling and always used the ball well.

Hutchinson 8. It may have been the snow and biting winds, but this lad was cool as a cucumber throughout and cleared when the wobbling ball evaded all others. A super leader at the back.

Cooper 7.5. A few uncomfortable moments in dealing with the wind and a gangly striker. But did brilliantly to hook the ball off the line when facing the win way.

Wallace 7. Solid. Too a while to get his passing game going but his ball to put in Gregory for his goal was a peach. Picked a lot of lose ball in midfield and used it well

Williams 7.5. Much better display. Was involved in everything and used the ball faster and with much more purpose than his previous games. Won some important tackles…but really must learn to jockey better on the outside of the box.

Saville 7. Didn’t score in the first 50-odd seconds – appalling. Should have scored when set up by Gregory in the first half but blazed over the bar when a cool head would have produced a goal. Efficient though quieter than previous away games.

Marshall 7. Yet another very disciplined display capped by a truly spectacular goal. Rarely gave the ball away, played everything simple, kept his shape while closing down but found time to surge forward in the second half and hit a right footed screamer into the top left hand corner, leaving the keeper with no chance. I was sitting on the halfway life behind where he struck it and it was a goal from the moment it left his foot.

Morison 6.5. Very quiet by Moro’s standards. Some excellent link play from time to time but missed a sitter in front of goal after being good work by Gregory.

Gregory 8.5. Man of the Match. What can you say about this player? A South Yorkshire lad who, quality-wise, stood head and shoulders above anyone else on the pitch. Absolutely tore Barnsley to pieces, their defenders at no time able to contain him. His one-on-one finish after being put in by his supplier-in-chief Wallace was sublime, a real assassin’s goal. And a moment shortly after, where he controlled the ball in the box and took out both the goalkeeper and marker in the process was the highlight of the game, bar Marshall’s strike. Until his premature substitution he was involved in every danger moment in the Barnsley box and his hold up play was extraordinary. Blotted his copy book only by missing a second one-on-one in the second half, he keeper this time saving.

Subs:
Shackle (for Gregory) 7 Won everything he went for and snuffed out any further Barnsley threat.

Fred (for Marshall) 7. An intelligent contribution at both ends of the pitch. His miss, having outrun their defence, was a bit of a shock, planting it well wide with only the keeper to beat – he tried to curl it…and it never even began to curl….

Tim (for Morison). Only on a minute or two and hardly got a touch.

Social mention to Referee Peter Bankes (9). A real old-school officiating. Let the players get on with it. Little fuss, lots of common sense and no bookings for either team, though another referee would have made at least four. Doubtless his Assessor will have marked him with a low score and he’ll be fourth official next week.

* Apologies, chaps. All my records are in a computer which I can’t open. So I had to do all my records quickly by hand – and I mis-read the record sixth consecutive win at Crewe as 1-1. The fifth and sixth win in that run were remarkable. In the fifth game we were 2-0 down at the interval to Hartlepool. But Neil Harris stepped off the bench to score a second half hat-tick to turn the game on its head: the only Millwll player ever to do this. The sixth win, at Crewe, was secured by an injury time goal by Jason Price. Just like this run, I had the honour of seeing four of the six games…