Wallace off to WBA!

STWall said:
What reception will he get when we play them?
Click to expand...

STWall said:
What reception will he get when we play them?
Click to expand...

No need to boo him, maybe a few choice remarks if he comes close to us, but nothing malicious. In reality regardless of how he's moved, the fellas been offered double his wages. Can't knock him for taking that when I'm sure all of us would jump at the chance of doubling our dough

Would rather focus on who wears our shirt

Phlion54 said:
For a player who was always going to go anything would have been better then the big fat nothing we ended up with
Click to expand...

We took a punt on making the play offs but didn't work out. From memory noone came in for him in January and most would have gone garraghty if we'd sold him last summer for £2m

Thank fuck for that. I don't know anyone who would even put him on the bench of their best ever Millwall team. Good luck to him but he's just another average former player now and will soon be forgotten.
L

At an altitude of 551 feet (168 m), it is the highest ground above sea level of all Premier League and Football League clubs.
...
The Hawthorns.

Strange choice of club? Must admit I'm bit gutted but players come and go and it's all about the money for them and with the silly amounts of it in today's game theyd be mugs not to take it

33lion said:
Offering 20k pw was always pissing in the wind unless we offered him £1m signing fee on top.

I have to look at this as if it were a new signing.

If Jed was at another club, in his prime years aged 28 with 38 goals, 41 assists in the Championship over the last 5 seasons, we wouldn't be able to get a sniff of his signature.

What would we realistically want to throw at someone like that if he wasn't already our player? £2-3m, £25-30k pw, 3 year deal? Instead we've offered him less than what we were paying Afobe last season. We've not shown him we want him enough.
Click to expand...

These jokers want £20-30k per week and there's people picking and choosing if they can afford to go to a game because the gas/elec/food/petrol bill has gone through the roof. Greedy bastards all of 'em.

The meltdown on twitter over his departure brings shame on this once unique club, fuck me it's shameful and embarrassing in equal measure.

we'll be in league two soon

Should have offered him £30k a week

JB needs to fuck off 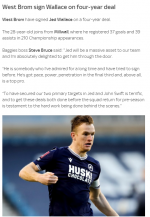 Peckham Lion said:
The meltdown on twitter over his departure brings shame on this once unique club, fuck me it's shameful and embarrassing in equal measure.

we'll be in league two soon

Should have offered him £30k a week

JB needs to fuck off

Peckham Lion said:
Only at Millwall

Was that Wall that got that wrong or Sky mate ?

Exactly, same here in many cases. Bods that don't go but slaughter the club for not spending money thaey don't have.

Millwall-84 said:
Was that Wall that got that wrong or Sky mate ?
Click to expand...

Jed gone, ballard gone, Lovelace gone, Afobe gone..... we will survive. Better players have moved on and more will follow. If it means our club survives "fck em all"

Freeing up a large chunk of money no doubt.
K

one of many, many reasons I swerve all social media except this site.