Quotes from the Charlton no life forum

its a shame they arent in our league, that 6 point headstart is really useful
L

Life with the Lions said:
This spotter, Smudge7946, throwing his choo-choo train out of his pram, all because the nasty Swindon board want more compo for Garner’s two assistants!

“Swindon have gone down in my estimation over this matter. They should accept they are just a nothing nearly West Country bumkins that never achieved anything in football except by cheating.

Denying their staff the opportunity to work with an up and coming vibrant team that boasts the best ground in the South of our capital City is both cruel and mean.

Swindon will only gain a reputation for holding back talent and denying a better future for its staff and players. If anything Swindon should pay us for the privaledge of allowing its staff to come to Charlton after they stagnated at such a dismal club.”

I don’t know what’s more funny, his actual post, or the fact that he really means what he’s typed!

Smudge7946 then gets put in his place, by this response from essexaddick, who tells him exactly the way it is, whilst giving their nearest and dearest (us), a silent, backhanded compliment!

“I will take this post as a wind up as it can't possibly be for real. At the current time we are a poor League one side stagnating in League one and although we used to be the top side in South London we havn't been that for many a year. Or have you not looked at the Premiership and Championship tables lately.

And I can't see that changing any time soon.”

“used to be the top side in South London…..”

And he was doing so well up to that point!
Click to expand... 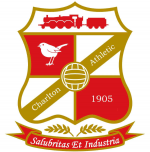 Just seen on no life
B

ForeverAddickted said:
Have to admit I'm surprised that Sandgaard's reveal over the new Charlton badge hasnt created more drama that what I'd have thought!!

Ha that’s Swindon’s badge but one of them has doctored it. It does seem more suited to charlton

Wippa said:
Ha that’s Swindon’s badge but one of them has doctored it. It does seem more suited to charlton
Click to expand...

Jealousy is a terrible thing, the Trainspotters hate us because we are based slam bang in the middle of what to them is railway 'heaven' but we are completely blasé about it, they are on a boring poxy little branch line that leads to Slade Green.
Last edited: Jun 17, 2022

Charlton Athletic are delighted to confirm the signing of England international Tea lady Doris Smith from Swindon Town. Welcome to The Valley, Doris!

Life with the Lions said:
Charlton Athletic are delighted to confirm the signing of England international Tea lady Doris Smith from Swindon Town. Welcome to The Valley, Doris!

Wippa said:
They’re basically signing the management and players from a team who couldn’t get promoted out of L2 last season and they think that’s going to propel them the champions league in 5 years

It won’t even propel them into the play offs in league 1!

There’s a reason they’re still in league 2, and its down to collective players not scoring enough goals and not getting enough wins!

Some of those players are now with the spotters, and they will have to adjust to playing in a higher, better division, against better players, with the additional problem of playing even better players from the three relegated teams from the Championship!

I reckon Danish Dave will give Garner 10 games, and if the spotters are lower half of the league by October, then Garner will be given his marching orders!

I can just hear Dave now, giving this sort of rousing speech to the spotters who hang on his every word, “Nothing, I repeat nothing, must get in the way of our glorious march towards the Champions League! All hail UEFA!!!”
Last edited: Friday at 1:55 PM

Life with the Lions said:
Charlton Athletic are delighted to confirm the signing of England international Tea lady Doris Smith from Swindon Town. Welcome to The Valley, Doris!

Swindon played 352 and the new coach liked to attack, attack, attack (apparently). Although, it didn't get him promoted out of League two.

I can imagine Danish and the new bloke in the dressing room before games shouting out some stupid mantra, with their fists pumped...Tora! Tora! Tora!.
Although, translated, I don't think it means Attack! Attack Attack!
I think it's Tiger! Tiger! Tiger!​
Cunts....

CrawLion said:
I put "Tora! Tora! Tora!" into Google translate and it came back as "Stoat! Stoat! Stoat!" who would have thought.
Click to expand...