Mens World Cup is ours, let’s look at the evidence

ok I’ll get me coat

Beaufoyboy said:
Mens World Cup is ours, let’s look at the evidence

Coat in this weather ?
L

I won't be watching
B

Millwall-84 said:
Coat in this weather ?
Click to expand...

I’m in the North Pole with Father Christmas

Beaufoyboy said:
I’m in the North Pole with Father Christmas
Click to expand...

We will get through the group then fly home

We are not good enough to win it
B

Beaufoyboy said:
Mens World Cup is ours, let’s look at the evidence

Just say NO to drugs!

I think I fancy someone like Brazil. I can’t see us getting near it. Will have a hangover from the Euros.

You been on that Spice again...

If it comes home anymore, that Patel bird will be demanding overtime money.
She'll be rushed off her feet..!! 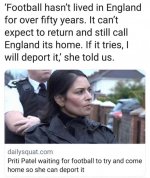 Not watching it either.... hypocritical woke mugs...

Only thing coming home in December is Chris Rea, he Drives home for Christmas every year!!
Last edited: Aug 2, 2022

I see the premier players have agreed to stop doing the black power salute whilst kneeling, i wondder why

I'm guessing they'll all be against exploitation and racism again, once the thing is over and assoon as they've had their fees from bookies, junk food companies and murderous Arabs.

The report is based on interviews with 132 migrant construction workers rebuilding Khalifa stadium, set to be the first stadium completed for the tournament and slated to host a World Cup semi-final in 2022. A further 99 migrants who were also interviewed have worked in landscaping the green spaces in the surrounding Aspire Zone sports complex, where Bayern Munich, Everton and Paris Saint-Germain players trained this winter.


Every single construction and landscape worker who spoke to Amnesty reported abuse of one kind or another, including:


Amnesty uncovered evidence that the staff of one labour supply company used the threat of penalties to exact work from some migrants such as withholding pay, handing workers over to the police or stopping them from leaving Qatar. This amounts to forced labour under international law.


The workers, mostly from Bangladesh, India and Nepal, spoke to Amnesty in Qatar between February and May last year. When Amnesty researchers returned to Qatar last month, some of the workers had been moved to better accommodation and had their passports returned by companies responding to Amnesty findings, but other abuses had not been addressed.
C

How many slaves have been killed building the Stadiums ?
B

Millwall-84 said:
You been on that Spice again...
Click to expand...

Old spice is only one I’ve ever used
B

Shawmi said:
Only thing coming home in December is Chris Rea, he Drives home for Christmas every year!!
Click to expand...