Cahill Was A Worthwhile Gamble 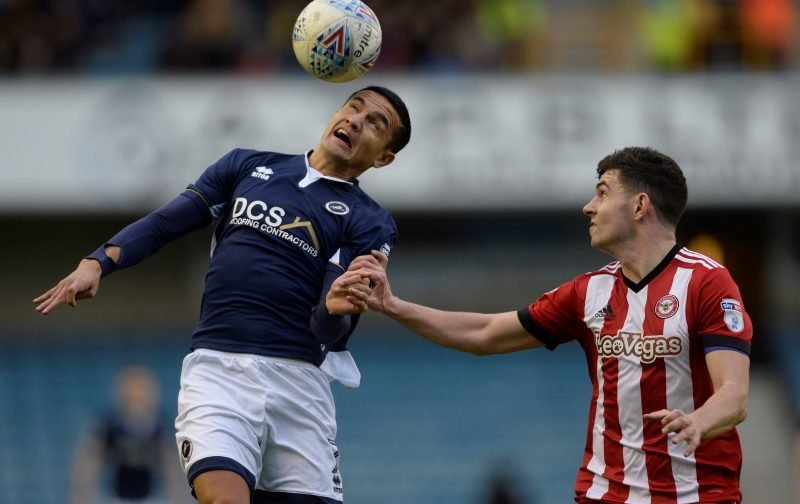 Millwall manager Neil Harris has admitted that bringing Tim Cahill on for his second club debut against Cardiff City was a risk with his fitness levels, but it was a risk worth taking.

With Junior Hoilett scoring after three minutes had been played, Lee Gregory had us back on level terms on Friday evening five minutes before the half time break and despite having the better of the game, it was a solid point on the day.

Having rejoined the club the other week on a short term contract until the end of the campaign as he looks to keep his World Cup hopes alive, Cahill re-debuted as a 90th minute substitute replacing Gregory.

Whilst he wasn’t given long, Harris told London News Online that it had still been a slight risk given his fitness, but he felt it would give the side and the fans the perfect boost to see the game out.

It does of course mean he now has a couple of minutes under his belt which will help bring his fitness on further, but Harris stated Cahill’s use this season would be in ‘pick and choose’ moments as he sees him as an ‘impact substitute’ for us, at least for now.

‘He is an impact sub, certainly for where he is at the moment fitness-wise. He was in the squad at the weekend but that doesn`t mean he will be in every squad or that he`ll be coming on the pitch every week. He is with us, the group, to get fitter. It was a bit of a gamble to put him in the squad at the weekend but I felt we all wanted that little boost for a big game, live on Sky – that it might just need a 10 or 15-minute cameo from Timmy to get us over the line or get us a goal. He has still got a long way to go with his fitness. You won`t see him start a game for a while.’

It does mean though that he gets his run out in our shirt for the first time since May 9, 2004 and the game against Bradford City before he departed for Everton, and having left Melbourne City in early December owing to only getting 94 minutes in six fixtures, it got him back on the pitch and was a step for him.

‘Match minutes will help his cause, that is obvious. But the fact he is training at a Championship club, with good players and a team who play at a really high tempo will be of benefit. When we train, we train properly. We`ll work closely with the Socceroos to get them all the information they need so that they know where he is at. Hopefully we can support his opportunities to get to the World Cup.’

In terms of when he may make his full starting debut following his return, that will take time.

‘He needs a lot more minutes on the training pitch and in behind closed doors games to really get him up to speed. How long before he is ready to start a game, we’ll have to see.’